Today, as we celebrate Ignatius’ birth in heaven, the gospel reminds us of Jesus’ words: “Follow me and let the dead bury their dead”. We need only recall Ignatius’ last day in this city of Rome to discover how he accomplished these words of the Lord.

It was the 30th of July, a summer day. Ignatius did not feel well but he knew how to carry the cross of sickness and suffering in the wake of his Lord. However he felt that the eternal meeting with his Friend and Lord was drawing near and asked his secretary to obtain the Pope’s blessing for this passage through death towards eternal Life in the holy Trinity. But his secretary, who was used to seeing Master Ignatius in his total abandonment to his divine Majesty’s desire, in health or in sickness, for a long life or a short life, for time or for eternity, observed that he saw no urgency, all the more since the courier for Spain must leave at all costs that same evening.

Saint Ignatius would have preferred the Holy Father’s blessing today, Thursday, rather than tomorrow, Friday, but he told Father Polanco to do as he thought best. “I leave it to you, in full freedom”. And it was this same freedom in the face both of life and death that allowed Saint Ignatius to be certain that the Lord was calling him to himself and to discuss that evening with his brothers the acquisition of a house which the Collegio Romano urgently needed in order to expand. Everything seemed so normal that nobody was worried and, that night, they all left Ignatius to retire on his own. From the next room Master Ignatius could be heard praying to God, but his colloquy with the Lord of life always prolonged his conversation with men.

Ignatius’ heart was not torn between life and death or divided between time and eternity. In his Constitutions he asks that, throughout his life as well as – and even more – in death, a companion of Jesus strive and see to it that God our Lord is glorified and served in his person, and his neighbour edified by a living paschal faith, because, through the incomparable sufferings of his earthly life and his death, Christ our Lord acquired blessedness for us. At dawn on July 31st 1556, towards five o’clock, the community discovered Saint Ignatius in agony, alone with his lone Lord, finally in the fullness of the joy for which every man is created.

Master Ignatius learnt to follow the Lord as his life, letting the dead bury the dead. Because, for him, a human person was not a creature for death. Man is of course mortal and Ignatius too feared sickness and agony, wishing with all his heart for a long life in good health. But in his paschal faith the evocation of death highlighted the fact that life is grace, that time is grace. Master Ignatius could teach us, on every occasion time presents us with, how to meet God’s eternity.

Ignatius’ insistence on occasions which arise, on occasions we must not lose, on the occasions God gives us is not the insistence of an opportunist who culls occasions to profit from them but that of a mystic who has experienced the fact that God’s action passes through the occasions of the present moment and manifests itself in many occasions of our daily life, giving these instants, which are more frequent than we realize, the infinite breadth of eternity. Bearing in mind, in this Eucharist, Ignatius’ last earthly day, let us learn from him how to be both faithful to the present time and open to this time which is to come, in him who came to accomplish in eternity what he himself began in us in the present. It is thus that Ignatius – according to his own words – found God every time and at every hour in which he wanted to find him, living the present time “sub specie aeternitatis”. Through the intercession of Saint Ignatius may the bread and wine which unite us to Christ’s passion and death lead us along our path of life until the Lord comes (eternally) now and always, forever and ever.

Read the other homilies here. 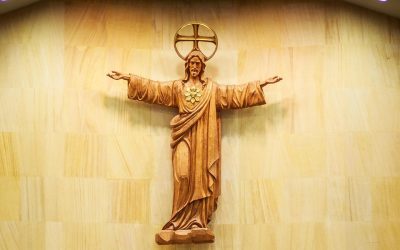 Consecration of the Society to the Heart of Jesus

This consecration will not only conclude the Ignatian Year, but continue to foster the current of grace which has been flowing in people’s hearts since May 2021. Father General chose this consecration of the Society to the Sacred Heart. For Jesuits, it unites word and... 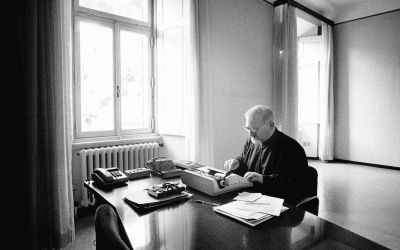 Video series from Fr General Watch the video below to join Fr General as he reflects on the Society, the Church and World. Fr. Arturo Sosa begins his explanation of how the Society of Jesus’ mission is not just a concern for Jesuits by drawing on the material of the...