The newness that comes from God

Availability and welcoming of the newness that comes from God. That is how Ignatius experienced conversion!

How can one fail to be moved, on entering the camerette of Ignatius in Rome, by the contrast between the tiny table at which he worked and the intensity of his desire to travel the world! With neither sadness nor resignation, he had accepted, however, living in Rome to write the Constitutions: this was the path Ignatius chose so he might respond better to the love of God. The ardent soul behind the words Ad Majorem Dei Gloriam was confined to just a few square metres. Ignatius’s spiritual pedagogy allows us to grasp exactly what permanent conversion meant to him. It was based on three attitudes which each of us is asked to coordinate however suits us best: being available to God first, trusting in our ability to make progress, and displaying a calm resolve.

In Ignatius, the greatest resolve of all is to make oneself totally available to God. His small group of companions having been founded, Ignatius agrees to being elected as Superior General. Now the Society, after being recognised by the pope, needs constitutions. With the help of his secretary, Juan de Polanco, Ignatius governs the nascent Society as new questions arise for the first time. The Society of Jesus does not develop smoothly, as though following a CEO’s business plan: It adjusts to circumstances and new demands as and when they arise, for instance, for the foundation of colleges. But Ignatius tenaciously follows through on the insight he received right at the start: to remain open to the turn of events. This focus on being available to God’s will first and foremost is fundamental for Ignatius and is particularly obvious in his Diary.

His Spiritual Diary, written between 1544-1545 during his stay in Rome, reveals how Ignatius wrestled with his conscience so that an ever new understanding of and response to the work of God might be evident in his decisions. Subject to bouts of tears, Ignatius even refused to accept that which the mystical tradition considered a divine gift. Instead, he discovered he had a thought “which penetrated to my very soul.” He wrote on March 14th, 1544, “How much reverence and submission should be shown on going to Mass when I had to pronounce the name of God Our Lord, etc. No tears were to be sought, but this submission and reverence.” Ignatius does not fight whatever is going to happen. He just acknowledges it is what it is and adjusts to it. His hunger for an ever-greater God who is continuously opening up new horizons takes root in his personal experience. This nurtures within him the ability to welcome the newness of the Kingdom that depends solely on God, who invites us always to cooperate with him. “Ignatius was following the spirit, he was not running ahead of it,” Jerome Nadal observed of him. 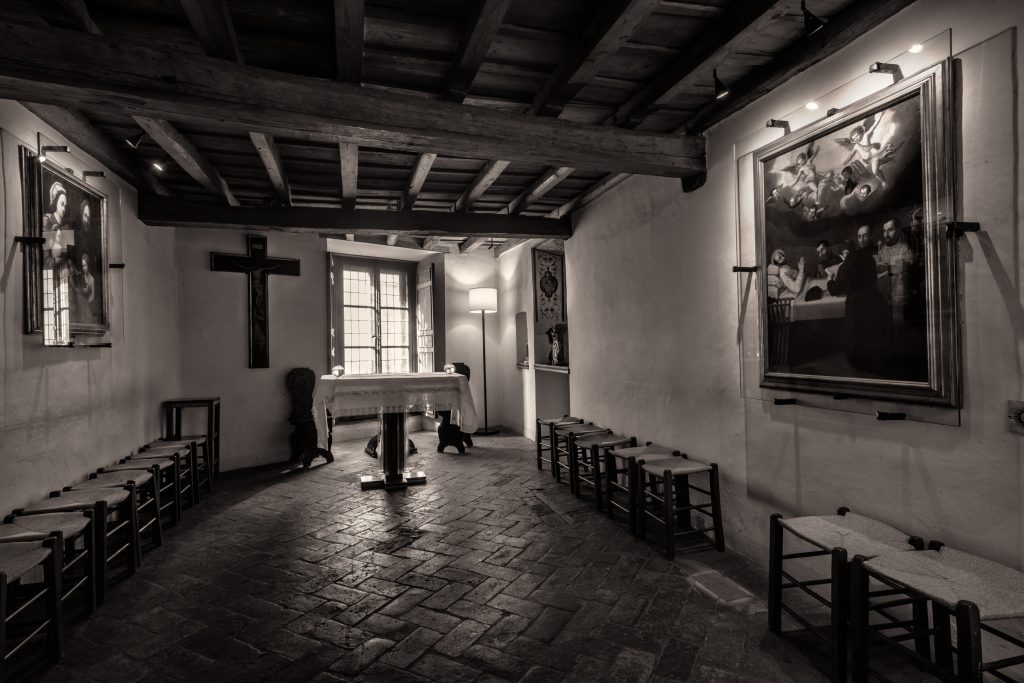 The rooms of St. Ignatius in Rome

Conversion means welcoming the work of God rather than taking a decision to conquer oneself, one’s passions and sins. Ignatius vehemently reminds Francis Borgia of this when Borgia’s admiration of the Jesuits leads him to desire to join the Society. Perceiving that his correspondent was upset by his internal obstacles, Ignatius replies plainly: “For my part I am convinced that I am nothing but an obstacle, both earlier and later.” However, this statement of weakness does not in any way feed despair. God’s mercy comes first, bringing joy. That is why Ignatius directs his correspondent towards the only thought that counts. In a letter written to Borgia at the end of 1545, he encourages him to “experience humility and charity profoundly.” No one could fail to recognise in this what the Exercises say about personal life reform: “For let each one think that he will benefit himself in all spiritual things in proportion as he goes out of his self-love, will and interest.” (SpEx, 189). Conversion means “going out” of oneself, with love and humility.

A heart that rests on its foundation, which is God’s work of mercy, allows itself to be led by the dynamic of the Spirit. The mission of the Society, which for Ignatius means helping one’s neighbour principally through the preaching of the word of God and spiritual conversation, reaches its fullness first and foremost through the testimony of one’s own life. This implies knowing how to correct each other, with charity, just as in a letter in 1546 Ignatius exhorts the companions he has sent to the Council of Trent. The mission is a training in perseverance, a key word in the Constitutions. It is the manifestation of that serene resolution to set forth on the journey and keep going, and the ability to handle any difficulties one may encounter in the quest for goodness. Conversion does not imply straining towards that which we wish to acquire, even when this may be the perfection of a virtue. It is rather the patience to put obstacles to one side and to welcome the newness of the gift of God, who is unpredictable and not defined by either our will or our efforts.

Ignatius sensed an ever-greater God. Receiving everything from on high gives life down here a shape that is ever new and directed towards God with purpose and joy.