The wound of Ignatius in art

The wound of Ignatius in art

Íñigo de Loyola was a proud man who saw great things for his future. He imagined a life filled with adventure, fame and riches – dreams of life at court and all the honors that accompanied them. Those dreams came to an end in 1521 when, badly wounded and subjected to an excruciating convalescence, Ignatius was transformed in a process of gradual self-discovery, grace and conversion. It is no surprise that the structure of the Society of Jesus, and the formation of her members, closely mirrors Ignatius’ journey to a life of service. The question we should be asking ourselves is if, on the anniversary of his injury and conversion, we focus only on Ignatius’ spiritual conversion, or if we truly honor his literal embodiment of vulnerability – the embodiment that founded the Society of Jesus – by finding strength in fragility.

As members of a Body, we are encouraged to place ourselves under the banner of the vulnerable God, the Lord who chose a humble and beautiful place [Ex 144] to call his own. This is the Christ of Glory, who, in the celebrated Portal of Glory in Santiago de Compostela, unashamedly shows his wounds–that is, vulnerability–as the way of salvation. By choosing vulnerability as the way, Ignatius does not distance himself from his Lord, nor does the Society that walks in his wake.

The worst and the best of ourselves can emerge from our wounds: a hurtful and violent word, which is nothing more than fragility wrapped in noise and rage, or a courageously vulnerable word that, without hurting or making noise, is the one thing capable of connecting with another: with connecting to THEIR wound. There, in the background of the depth of another person, the encounter is celebrated.

Recall Michael Buckley’s famous words of encouragement to Jesuits preparing for priesthood: Are you vulnerable enough to be a priest? That is, do you have enough faults and failures, trials and weaknesses? What do I mean by weakness? Not sin, but the opposite. Weakness is the experience of a peculiar vulnerability in the face of suffering, of a deep sense of inadequacy […]. The strength of our priesthood lies precisely in the weakness that seems to threaten it. […] Weakness is a profound relationship between us and others. It is also the context for the Lord’s epiphany; it is the night in which He appears. The Eucharist can only penetrate our lives if it has been broken and distributed.

The bronze working of Canadian sculptor William McElcheran (1927-1999), San Ignatius the Pilgrim, is a fine reflection of this relationship. It is a work of art that represents Ignatian vulnerability because it focuses not only on the bodily wound of Pamplona but also conveys an interior struggle: simultaneously drawing the attention of the viewer both deeper and to the surface. 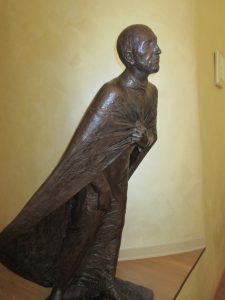 He moves forward. Always with one foot in front, always on the way, both outwardly and inwardly. He defines himself as a pilgrim: the way opens up, step by step. He is not alone, although it may seem so: he tenderly bends his face to meet others, to raise spirits and help souls, contemplative in action, anchored in movement. He wears only a cloak to protect himself from the elements: he goes, vulnerable, to where he did not know: He follows the Spirit, he does not go ahead of him […], wisely ignorant, with his heart simply set on Christ.

Always bent, not straight and unperturbed, but humbly leaning, ready to meet, attentive and with a keen ear. Always available, head uncovered. And many have leaned on your inclination, as Jesuit poet Greg Kennedy beautifully expresses in a sonnet-oration. Always on the move, always attentive to the motions, discerning: Many anchor their calm in your movement. If this inclination were the expression cast in bronze to speak of your vulnerability, would that we could exclaim: Many have followed you on your path of the vulnerable. Many have found support in this inclined gait, more flexible than rigid intransigence and more resistant than soft permissiveness, solidly grounded in an equally pilgrim God.[i]

At the base of this inclination is the wound of Ignatius, not only the one of Pamplona, but the most interior and lasting one, the incurable one, the one that kept him always inclined and on that path both interiorly and exteriorly. After being cured, the great existential wound that he must face is that of voluntarism and narcissism. He wants to go to Jerusalem, but in the way he wants, by mortifying himself. An exhausted body is the only thing he earns in his eagerness to imitate the saints.

He does not close himself in his wounds. In his fragility, God meets him. The wound of scruples opens a new path for him, from voluntarism to availability. Integrating his sufferings makes him more available: he chooses and turns this fragility towards another, in an apostolic and fraternal way. God frees him from his ego, making him a free and generous person. It is the difference between becoming a saint by oneself and letting oneself be molded by God: Ignatius discovers what it is to be imperfect, a saint with cracks and weaknesses. He becomes more sincere and humble.

In this sense, the sonnet speaks of Jerusalem always moving away: destiny is certain and changing, like the horizon. Ignatius discovers that Jerusalem was not where he wanted it to be, but is in the magis. It is part of vulnerability not to have clarity; not to carry his own “Jerusalem” with him as an untouchable and unshakable treasure, but to place the point of gravity always outside himself. Ignatius does not remain immobile on the roadside (Mario Benedetti), but gets wet and gets down to work, because love must be put more in deeds than in words [Ex 230].

A significant detail of the statue is the letter that has become one with his body, a sign of his intimate and fraternal connection despite the distance among companions on the road, spread over the innumerable frontiers of the world. His vulnerability is apostolic and fraternal. He knows he is sent as an apostle, pushed by the Spirit and fundamentally unarmed (even “naked”, according to the Syriac term). From the bed of Loyola to the camerette of Rome, the laborious transformation from the voluntarist Íñigo, who hides and forgets his fragility, to the vulnerable Ignatius, who chooses it as a way and a portal of encounter took place.

Let me end on a personal note. For years, I have been approaching the theme of vulnerability, although it was never as clear as during my Tertianship in Alaska. This year, marked by the pandemic, I have been able to deepen it in a group exhibition of contemporary art at the O_Lumen space in Madrid, collaborating with a Dominican and four artists whose work I find particularly lucid and hopeful in highlighting the inherent strength in fragility, showing that pilgrim and apostolic vulnerability is something universal that connects us to one another, and in the book Vulnerability in Art (PPC).

[i] Savour the sonnet in its original language at: http://ignation.ca/2018/07/31/st-ignatius-pilgrim-sonnet-statue/

Written byÉcrit parEscrito porScritto da Bert Daelemans
Bert Daelemans SJ is a Belgian Jesuit. He holds a doctorate in theology. He trained as an architect, civil engineer, organist and pianist, but his childhood in Cameroon led him to the priesthood. He studied in Paris, Madrid, Berkeley (USA) and Louvain. He worked for a time with the Yup'ik people in Alaska. He currently researches and teaches the Theology of the Sacraments, the Holy Spirit, Liturgical Space and the Arts at the university of Comillas in Madrid.