Five saints and one feast

Five hundred years ago, because of a leg injury, God broke into the life of Ignatius of Loyola (1491-1556). That wound eventually led Ignatius to put himself at the service of the Pope and the Universal Church and, with a group of companions, to found the Society of Jesus. No one would have thought that this pilgrim, who had first arrived in Rome limping from his wound and with a great desire to imitate Jesus, would a century later, on 12 March 1622, be canonised by Pope Gregory XV in St. Peter’s Basilica.

On 12 March 2022, the eve of the ninth year of his pontificate, Pope Francis came to the Church of the Gesù in Rome to celebrate the anniversary of this canonisation. The Holy Father, himself with a limp and with a tireless love for the Church reminiscent of Ignatius, attended this memorial of a life lived with love and passion. 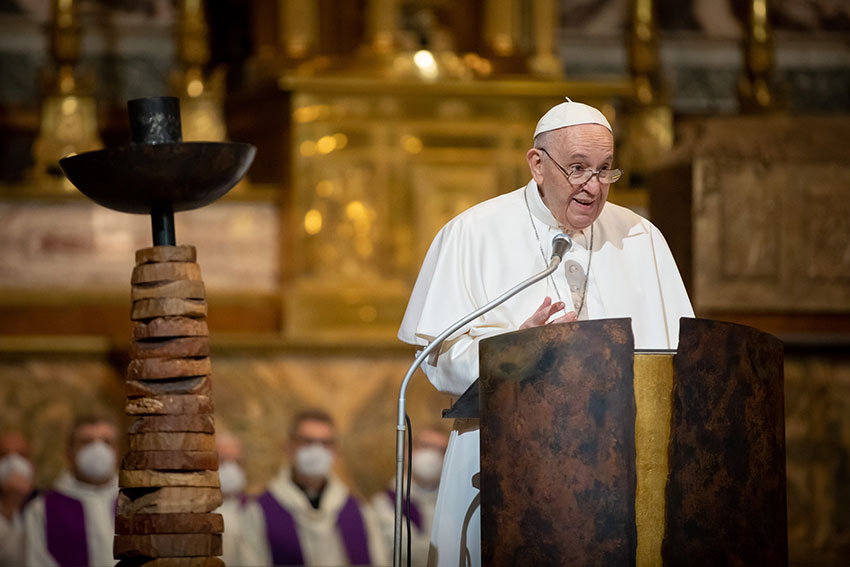 But he did not do so only because of Ignatius Loyola. Because, in addition to Ignatius, the following were also canonised: Francis Xavier (1506-1552), missionary and one of the first Jesuits; Teresa of Jesus (1515-1582), religious sister and mystic, founder of the Discalced Carmelite sisters and Carmelite fathers and brothers; Isidore the Farm Labourer (1079-1172), patron of agricultural workers and of the city of Madrid; and Philip Neri (1515-1595), Italian priest and founder of the Oratorians. “Four Spaniards and a saint”, as has been amusingly commented ever since… especially by Italians. It was the first collective canonisation in history. And so, the Pope came to pray with Jesuits, Oratorians, Carmelites, representatives of the diocese of Madrid as well as countless lay men and women from all over the world, some present and thousands who followed the telecast. The Eucharist was presided by the Superior General of the Jesuits, Arturo Sosa.

Pope Francis emphasised that the immense imprint of these saints, which transcends centuries, nationalities and personalities, is due primarily to the Lord’s initiative. And that initiative, as the Pope recalled as he reflected on the Gospel of the Transfiguration in which “Jesus took with him Peter, James and John”, is a call rooted in the community. In the face of the temptations of individualism, clericalism, rigidity and divisive ideologies… the saints are those who have become “pillars of communion”.

Ignatius was an example of such communion through his discernment and through his empathy with the Church – gifts also for us today of his Spiritual Exercises. The Pope referred to the danger of a comfortable and static faith recalling the courage of saints like Teresa. Who climbed with effort the mountain to where earth and heaven meet, “where man ‘confronts’ God”. He recalled Francis Xavier who brought the Gospel to the most unexpected corners of our world and society. In the midst of a reality disfigured by war, injustice and other evils, the Pope finally called for a prayer that does not turn away from a brome world but rather transfigures it, just like Philip Neri did in caring for street children or St. Isidore in working the land.

The Celebration was marked by other significant moments. We were spellbound as we heard the heartbreaking words of the Psalm “have mercy on me, answer me”, sung by a young Ukrainian woman. We were moved by the prayer at the tomb of Ignatius and before the relics of the other four saints; the offering made by refugees from the Centro Astalli in Rome to the Holy Father; the wonderful choir of the Collegio del Gesù; and finally, the affection and humility of the Pope. As Universal Pastor of the Church, Francis presented himself as a spiritual son of the Society on the anniversary of its two great fathers, without missing the opportunity to allude to the third of them: Peter Faber, whom he himself canonised.

Read the full text of Pope Francis’ homily and watch the photo gallery on jesuits.global.