Metanoia: an attitude… and a statue

The Belgian artist Johan Tahon had already presented his sculpture entitled Metanoia to Father General Arturo Sosa and to Pope Francis. It depicts St Ignatius in his conversion process, in particular during the inner transformation that the knight, who was wounded in the legs, would undergo during his convalescence.

This was at the very beginning of the Ignatian Year in May 2021. In Rome, the programme of the Jubilee Year includes the public presentation of this work in various Jesuit places visited by pilgrims and tourists. First in the camerette, the rooms of St. Ignatius from September to December 2021, then in the church of Sant’Andrea al Quirinale in January and February 2022, and now, for Lent 2022, “Metanoia” (a Greek word that evokes the attitude of conversion, a change of heart) is presented in the church of Sant’Ignazio, in the heart of Rome.

The opening of the exhibition at this church took place on 6 March, the first Sunday of Lent. In a space that is perfectly suited to the statue, with its artistic environment and lighting, the event orchestrated by the rector, Vincenzo D’Adamo, included four talks and ended with an organ concert by Maestro Filippo Manci. He performed works by Bach, Brahms and Mendelssohn, thus putting the art of music in dialogue with that of sculpture.

Pascal Calu, a Jesuit scholastic responsible for the universal animation of the Ignatian Year at the Communications Service of the General Curia, spoke first. He emphasised the importance of dreams in the spiritual life; they allow us to move forward towards greater projects than we can imagine. Even in weakness, as a result of wounds, the awareness of our vulnerability opens a space for conversion. This was the experience of Ignatius; it is well expressed in the statue by Johan Tahon. 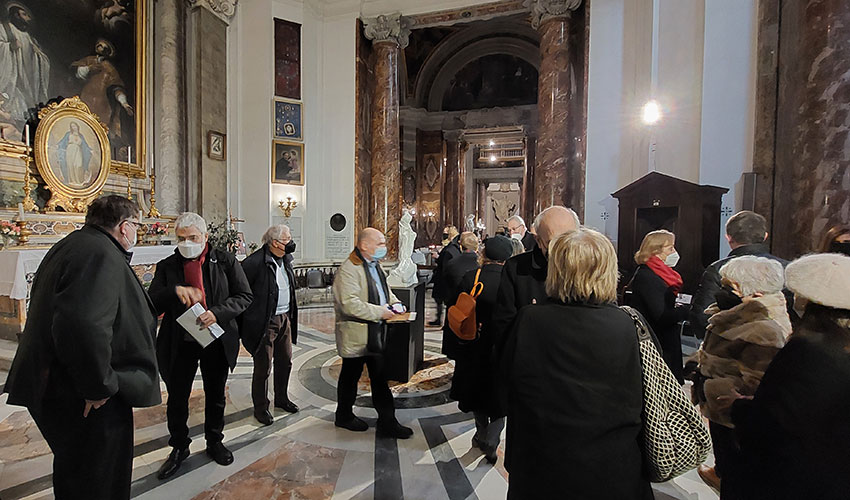 Then Maria Cristina Misiti, who worked for a long time at the Italian Ministry of Cultural Heritage and Activities, spoke about the relationship between “conservation and innovation” in art. She spoke of the interest of the intrusion of contemporary artistic creation in worship and in sacred spaces. She underlined how the church of St. Ignazio, by offering hospitality to the work entitled Metanoia, was transformed into a grandiose screen harmonizing past and present.

It was then the turn of Claudio Strinati, professor, historian and musicologist, to make the connection between the sculpture on display that day and Ignatius of Loyola. He focused on the word “ignis”, fire, which he recognized in the name of Ignatius of Loyola. According to him, religion and art have together been a source of inspiration for the Jesuit tradition. Art has a ‘subliminal’ dimension that lets the spirit through. Fire is also a source of light, light brings illumination – not only external but also internal – and reveals the nature of the spirit. Metanoia inspires Professor Strinati to move from the wounded warrior to the committed fighter for faith. What may seem finite, limited, gives way to a new perspective; a passageway opens; fragility finds strength in the sculptural work.

Due to a health problem, Johan Tahon could not be present at the church of Sant’ Ignazio that day. His wife, who has accompanied him for 20 years on his artistic journey, spoke of the importance of this work for her husband. She recalled that it was after a pilgrimage to Loyola and after being marked by the difficult experience that Ignatius had to go through, that Johan Tahon created this work, which he identified afterwards with Saint Ignatius. He was then particularly touched by Pope Francis’ openness of spirit and interest in his interpretation, as a sculptor, of the Ignatian experience when he had the opportunity to give him his work.

If you are in Rome or will be in Rome between now and mid-May, be sure to see Metanoia in the church of Sant’Ignazio. It will then be on display until the end of the Ignatian Year on 31 July at the Church of the Gesù in Rome.